Beautiful day on Thursday, June 16. Lots of wildflowers and hummingbirds around the tower. Lots of fire crew activity as well as the firefighters continued to check that the fire between White Oaks campground and the tower was out. Twenty Laguna hotshots from the Cleveland National Forest camped at the tower Thursday night. We were all surprised by a raging windstorm which lasted throughout the night. The three hotshots with hammocks had to abandon them for a place on the ground. Despite the annoyance, the parade of different clouds racing by at different heights was a spectacular sight. The cold front which produced the wind turned the weather much colder. The cold persisted into Friday with a high of 50 degrees. 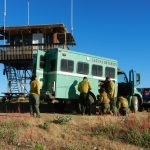