5/14/22
Lookouts 45 and 55
In the morning the sky above was clear but the horizon was hazy. Wind was out of the Northwest at about 12 mph. The temperature was 62 degrees. We had an early morning visitor who had heard of the great view from the pit toilet and had to check it out. At 1015 we had a scheduled visit from some of the members of BSA Troop 799 (boys-4) and 2799 (girls-4) along with 4 of their adult leaders. They are camping out in China Camp for the weekend and have a visit to the MIRA observatory planned for this evening.
The afternoon weather was warmer ranging from 75 – 80 degrees and the visibility was over 20 miles. We could see most of Monterey Bay as far as Santa Cruz. The wind decreased and was dead calm in the later part of the day. We had 6 mores visitors in the afternoon including a bicyclist from Carmel Valley Village, Lookouts 13 and 20 with their two dogs and 2 friends of theirs and their dog. Jeff the engineer for the MIRA observatory stopped by and advised that Chris Reed is no longer working at the observatory and that they are still looking for his replacement. Dispatch did not do an evening roll call so we contacted them via radio and logged off at 1753 hrs. Lookout 45 overnighted on Friday and is staying over through Sunday. 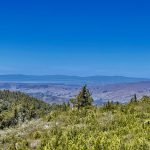