My post of 5/15 did not take – photo was too large I learned later. The original post was too much to recreate, but I did want to thank Lookouts Carolyn Hart and Phil Joest for responding to my request for a partner. It showed that the Google Group works. Carolyn ended up spending a few hours with me. Also, I wanted to post the attached photo from the 14th when Dave HItch and I led a tour of the Tower. Thanks, Dave. And thanks to Nancy Baker and Mike Smelser for sharing the lunar eclipse with me.
Other than as a Lookout’s Lookout Day (Steve Dean, Patrol 18, showed up, too), the shift proved to be typical in weather as well as uneventful. I do suggest when typing up a report, one makes a Word Doc copy before submitting. And I suggest scheduling a shift before election day. It may be your only chance to delve into the Voter’s Guide! 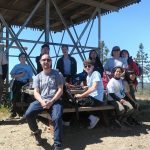