Smoke report—sort of. At 3:48 p.m. on Thursday while doing a routine check, I noticed something out of sync south of Junipero Serra Peak. There was a light gray “cloud” just above the eastern ridge of the mountain. It stood out in contrast to the bank of white clouds behind it. I had seen smoke once before from this same area when there was a controlled burn on Ft. Hunter-Liggett. I contacted dispatch to see if there was a controlled burn at the fort. I was told “no” and dispatch asked for an azimuth. Using that information, dispatch reported that it lined up with a Cal Fire controlled burn near Lake Nacimiento in northern SLO County.

Otherwise, it was a beautiful but uneventful two days. High on Wednesday was 70. High on Thursday was 76. The only mar on the two days was that the western bluebirds appear to have abandoned Chews Ridge. However, the little fellow in the photo below showed up to supervise hoisting the flags.

Bring whatever water you need. The cab reserve consists only of two one-gallon bottles. 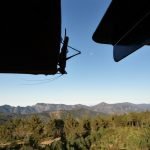